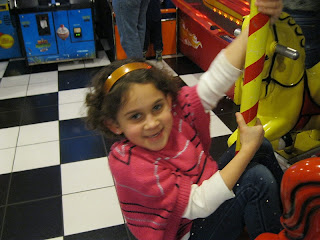 How does one teach a child to be a graceful loser?  I am clearly failing at it, as evidenced by the fact that my daughter bursts into tears and has a dramatic meltdown any time she loses a game. This morning I went to her school to participate in a "Math and Muffins" event.  Parents gathered in the gym and then headed into the classrooms to sit with their child(ren). One of A's friends didn't have a parent present, so we invited her to join us.  We had a deck of playing cards and some instructions for playing a couple of simple addition and subtraction games.  Since the games were mostly intended for two people, I let A and her friend play. I dealt the cards and then watched them playing the math games. You and I both know I was really just there for the muffin.  However, it turned out to be a mini muffin, which was tragic.

Things seemed to be going pretty well until my daughter lost two games in a row. She blamed her friend, alleging that her friend had made up the rules and then changed them as they went along. I witnessed both of them blatantly cheating and changing rules, so I'm not sure what the problem is. All I know is that I had a teary kid on my hands. Her friend suggested that they just get some markers and color instead.

I really don't know how to encourage her not to get so upset about losing. I've suggested that she just say, "Oh well, maybe next time!" When I play games with her and she wins, she does so "fair and square."  I do not let her win. The only exception is that when she was younger, I would usually rig the Candyland deck to let her win. As any parent will tell you, if you don't rig the deck, Candyland can go on for DAYS. Generally speaking, though, I don't go out of my way to let her win. I feel like it's good for her to lose sometimes. She just needs to find a way to cope with losing that doesn't involve copious tears.

My personal go-to strategy?  Talking smack about the other player. When I am losing at Words with Friends (which happens a lot), my usual tactic is to imply that my opponent:
See, talking smack about your opponent deflects the I-am-losing vibe and makes it more fun, right?

On second thought, maybe I should not be the one to teach my daughter about good sportsmanship.