Showing posts from March, 2020
Show all

When a car accident seems like the better bad thing . . . 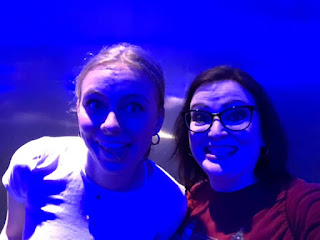 I've been meaning to write a new post for the past few weeks. I wanted to recap my February trip to Orlando. That seems like a million years ago now. But for the record, the trip was mostly great. My youngest sister couldn't make it, but my middle sister and my niece made the journey. Before they arrived (I flew in a day ahead of them), I went to Animal Kingdom with a friend who lives in the area. I had never met Ashley in person but we've known each other for almost 15 years. We both have May 2005 kids and met on a BabyCenter "birth club board" back in the day. Spending a day together wasn't awkward at all. Conversation flowed and we had a great time! My sister arrived later that day and we headed straight to Disney Springs for dinner and drinks at the House of Blues. It was warm enough to walk around outside - ahhhhh. The next day, we got up and headed to Universal Studios. We kicked off the day by riding the Hollywood Rip Ride Rockit, an insane coaster th
Post a Comment
Read more
More posts