Showing posts from November, 2020
Show all

Digesting Some Thoughts on the Election 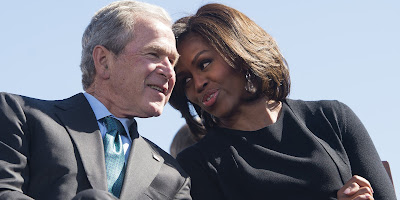 I got the news as I was out shopping for birthday gifts for my niece. I had just pulled into a Mobil station to get gas and a Wild Cherry Pepsi. My phone dinged with a new email. It was from Rolling Stone magazine. "Joe Biden is the President-Elect" read the headline. Immediately, I felt like a weight (a racist/homophobic/transphobic/ableist/xenophobic/misogynistic/climate change-denying weight) had been lifted from my shoulders. I finished filling my tank and headed inside to grab my Pepsi. I don't drink coffee but I was in need of some caffeine. There was no one inside except the clerk. Suddenly, I became Mrs. Extrovert. "How are you?!" I asked. Then, when I was checking out: "I love your nail polish!"  Back in my car, a scene from Toy Story 2 popped into my head. Remember the flight attendant Barbie in the post-credits scene? I posted a meme of Barbie saying "Buh Bye Now" on Facebook with no caption. On my way to my next stop, I called my
Post a Comment
Read more
More posts