It's none of my business what you put in your mouth 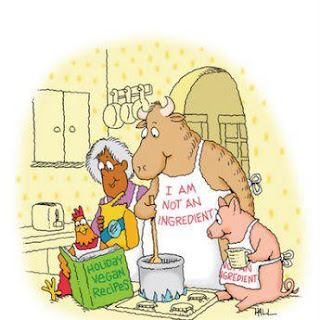 Truly, I know it is none of my business. It shouldn't matter to me if you want to put corn, sugar, soda, cauliflower, penises, or - God forbid - coconut in your mouth. But, may I share a minor rant? The recent surge in the popularity of bacon?  Getting on my last nerve. It's everywhere I look, from tee shirts to memes to random jokes on Facebook.

I know that divorcing ourselves from having an understanding of where our food comes from is so common as to be a non-issue. It's the American way, really. It's is hard for me to understand why we care so much about dogs and cats but not other creatures. I won't try to depress you with any facts, but Google the term "gestation crate" if you want to learn a little about where your bacon comes from. Factory farming is truly horrifying (by anyone's definition), and I struggle to understand why so many of us actively support it.  Personally, I am not worth that kind of suffering. There is plenty of other stuff for me to eat.

The other problem with the popularity of bacon is that the more popular it is, the more the food manufacturers feel the need to throw it EVERYthing. I have to read the fine print on every package and every restaurant menu to make sure they haven't found a way to make seemingly vegetarian dishes . . . meaty.  By the way, not that I'm a big fan of Applebee's but did you know that every single salad on their menu has meat in it?  Sure, I can ask for stuff without meat but seriously, we are talking about salads here, ya'll.

Vegans and vegetarians make some people nervous. I mean, I get it. I eat out with friends all the time and do not comment on their food. Considering my long-standing angst over my weight and my failings in that department, it's pretty clear that I don't make the wisest food choices myself. Most vegetarians and vegans prefer not to make a big issue out of their diet and are not in the habit of commenting on what other people eat. But if others insist on making bacon jokes every five minutes, it starts to feel a little like being backed into a corner. It's annoying.

Okay, I'm done with my rant. As you were, soldier.

Sam said…
It's interesting how foods become trendy. Bacon is definitely trendy right now. A few years ago it was cupcakes. (At least here in NY) Kale is also trendy around here now.
March 1, 2013 at 11:49 AM