November 28, 2009
Indeed, I did get up at 4:00 a.m. on Black Friday. Some of my friends who are Black Friday veterans advised me in advance not to take it too seriously, so that was the attitude I took. I was armed with shopping lists for my two nieces and three nephews. I scanned the ads on Thursday and plotted my strategy. I actually ordered some stuff online on Thursday, when some stores started their price drops. I knew Best Buy would be a nightmare on Friday so I ordered online from there (and got free shipping to boot). I also ordered a dollhouse for the kid from another retailer. The next day, she started blathering on about some very specific dollhouse that is NOT the one Santa ordered. Someone needs to tell her that once you submit a wish list to Santa, there are no edits. Santa accepts the first edition and that's all there is to it.

When my alarm clock went off at 4 on Friday, I very nearly turned it off and ended the lunacy right there. But, the dogs had also heard the alarm and the next thing I knew, I heard tags jangling and a collective "sweet! breakfast in the middle of the night!" and going back to sleep became an impossibility. I got my act together and was out of the house by 5:15 a.m.

I headed first to the craziest place of all - Walmart. I mean, there is an air of psychosis at Walmart on a "normal" day. My main target was toys and I thought they'd have some good prices. Everyone in town was already there, the traffic so heavy it required several police officers to keep cars moving in the parking lot. I have to say, though, that this being the friendly Midwest and all, people were not all that surly. Many were even downright jovial. I don't know that I would have attempted this same type of excursion back when I lived in the Washington DC area. I got in, found some stuff, and got out. I only bought a couple of "door busters" so in hindsight, I could have waited until another day to go. Lesson learned, I guess.

By the time I was done, it was around 7:15 or so. I drove to a cafe to grab some breakfast, as I had not yet eaten. I updated my shopping lists and tried to keep myself organized. The cafe is right next door to a Toys R Us and I was momentarily tempted to pop in, but I have to say I've never found spectacular pricing there. Plus, I wanted to get to the mall and get a parking spot, as I suspected they were already pretty scarce.

I completed a full loop around the entire perimeter of the mall before finding a parking space. I headed first to Gymboree, which was offering 30% off until noon. I also had a coupon for 20% off, so if you are challenged when it comes to math I will just tell you that I was looking at a hefty 50% discount. I picked up a few things for A and a dress for one of her girl cousins. Then I headed to Kohl's and focused my attention on the toy department. I bought a bunch of toys for my nieces and nephews. I picked up a "shake and go" car for one nephew. It was the police cruiser from the movie "Cars." I had to carry the bags all the way across the mall and then into the next zip code where my car was parked. Every time the bag was jostled, the car would rumble and then say, "SON, YOU'RE IN A HEAP A' TROUBLE!" Over and over.

Needless to say, I was tired to the point of hallucinating by mid-afternoon, but it was a good day. Between online and in-person shopping, I knocked out 90% of my Christmas shopping in one fell swoop.

Now, I just need to figure out how to explain to a four-year-old that there is no way that Santa is buying her this piece of crap Barbie camper to the tune of $70. Santa's generous and all, but he's not mental. 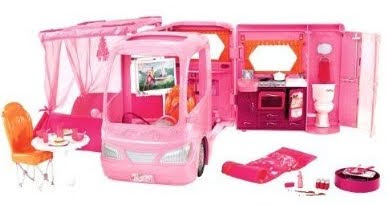 Just Lisa said…
Isn't it a relief to have almost everything done? :)

Were you the one who told me about the Furreal? I am SO GLAD I went before Friday. They were completely out at Target and Toys R Us yesterday.

You're braver than I am. I didn't step foot into Wal-Mart yesterday. But I went today to do my weekly shopping and it was relatively empty. Everyone must have been shopped out!