Why do they call those little candy bars "fun size?" Wouldn't the big ones be more fun? 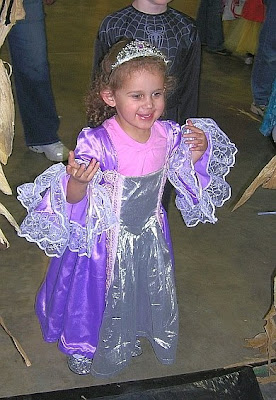 Halloween-related activities have kicked into high gear. We attended a community event last Saturday and another one this afternoon. Tomorrow, of course, brings the big denouement: trick-or-treating in the 'hood. One of us will stay home to dole out the goods while the other takes A down the street. Then we switch and hit up the neighbors in the other direction. Remember as kids we'd always hear that rumor that some house was giving out full-sized candy bars? I wonder if that rumor still gets around today. And, more importantly, where IS that house?

A's school is also having a "harvest party" on Friday. Some parents at the school don't want their children celebrating Halloween, so we all received a notice about the "harvest party." The party is being held ON October 31st and oh yeah, she is supposed to dress up as her favorite character. Dress up, as in, you know, a c-o-s-t-u-m-e. And we are invited to send treats along. But please note that this is not a Halloween party. Okay ::wink wink:: I get it.

I suppose I understand why many parents don't like the darker side of Halloween. Personally, I don't have an issue with this particular holiday. I don't know of a kid anywhere who sees Halloween as anything other than an opportunity to have fun, dress up, and most importantly - eat enough candy to rot his teeth right out of his skull.

As for me, I've been trying to keep my hands out of the candy stash on the kitchen counter. Fortunately, the Halloween events we've attended with our daughter have largely yielded crappy candy that I don't want. Nerds? A Dum-Dum? Um, no thanks. I'm waiting until the last minute to buy candy in order to avoid temptation. I usually try to buy stuff I don't like, such as Almond Joy and Mounds. Coconut is just so wrong - nothing should be crunchy and chewy at the same time like that. Am I right? Can I get an amen? No? Well, I never!

I do love me some chocolately goodness, though. Even better is dark chocolate. I'm hoping the kid will score some for me tomorrow night. More than hoping, I'm actually planning on it. I'll make her keep walking, clear into the next county if I have to, until I see a Hershey's Special Dark in her princess trick-or-treat bag. And none of this "Mama, let's share it" business either. 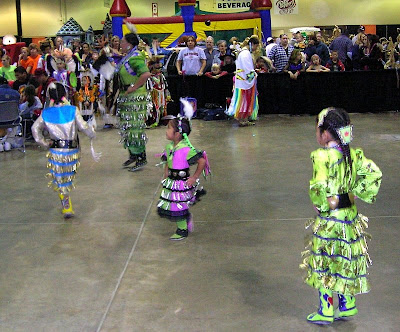 A local tribe, performing at a Halloween event. Can non-Native Americans score a dress with bells on it? I really, really feel the urge to have one. 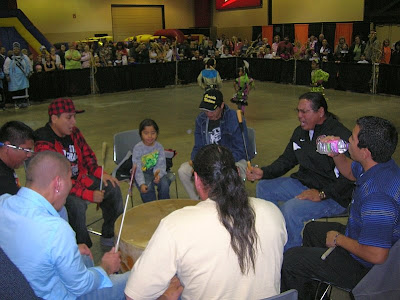 Sam said…
After eating seven "fun size" candy bars in one sitting, I told my husband to hide the bowl of candy and to only bring it out after the first trick-or-treater rings the doorbell. The temptation is just too great.

Beth said…
You know, I've always wondered why they ruin perfectly good chocolate by wrapping it around coconut. It's a cryin' shame, I tell ya!
October 31, 2008 at 1:42 PM