October 16, 2008
For months I've been been trying to figure out the best way to tell my daughter that she was adopted at birth. It's exactly as hard as you'd imagine it would be. We have children's books on the topic. Jamie Lee Curtis wrote a great book called Tell Me Again About the Night I was Born. We also have one called A Blessing from Above and another called My Family is Forever. We read them to her, but we haven't come out and said, "Oh, by the way . . . " She recently became aware of where babies come from (well, she knows that a baby grows in a woman's tummy - she doesn't know the mechanics of how such a thing happens). So, we have known for a while now that the day draws nigh (you like the way I went all Victorian on you there?).

In preparation, a while back I started telling her the story of how her dad and I met and how much we wanted a baby. I always say, "They wanted a baby girl and they wondered: 'where is our baby girl?'" And my daughter responds, "Here I am!" My intention was to keep building on that story and tell her how she came to be. But still, I was struggling. I know that it's important to be honest, but part of me feels like we are going to shatter her innocence.

I was visiting an adoption message board on Babycenter yesterday when a particular thread caught my eye. A birthmom had posted and offered to give advice to adoptive parents. The relationship between a birthparent and an adoptive parent can be fairly complicated. There is no blueprint for this sort of thing. So, it's always helpful to have advice from "the other side." Anyway, this birthmom spoke of a storybook that was created for her birthson, so that he would know and understand his own story. The book included pictures and a simple explanation of how he grew in one woman's tummy and how he has a family that loves him, etc.

I'm almost embarrassed that I didn't think of this idea on my own. It's perfect in its simplicity, really. Because I am not artsy-craftsy, I decided to hop over to shutterfly.com and create the storybook there (I'll order a bound copy of the book when I'm done). I've created an initial draft and now I'm digging through photographs to find the ones that fit the story best. I wish I had more photos of A's birthmother. Obviously she factors pretty prominently into the book. I have one that she gave me around the time that A was born, so I scanned that. There is another one that I snapped when I took her out to lunch about a month after the birth. We didn't take any photos of her in the hospital because we didn't think she'd appreciate it - what with her being in labor and all. She is very pretty and always has a smile (even in hard times). Of course, I haven't seen her in over two years (by her choice). I hope she is doing well.

What I'm not including in the book: A's birthfather. I don't know him, he denied paternity, he's in prison, and I don't have a photo of him. My daughter doesn't understand (at this stage, anyway) that a boy factors into the whole baby-making thing, so I feel like I can safely leave that out for now. I know the day will come, but that day is not now. Also, her birthmother has a son and may have another child by now as well - she married about a year ago (not to the birthfather, needless to say) and I know they wanted to have a baby right away. One day I would love for my daughter to meet her biological half-brother (I got to spend some time with him and really adored him), but again, I am trying to keep things as straightforward as possible. The story will unfold in its own way over time.

Wouldn't it be funny if, after all of my angst over this situation, we sit her down and read the book with her and then she says, "Okay, can I have some raisins?" This morning she asked me, "Mama, where did you buy these Froot Loops? At the Froot Loops store?" Funny kid. 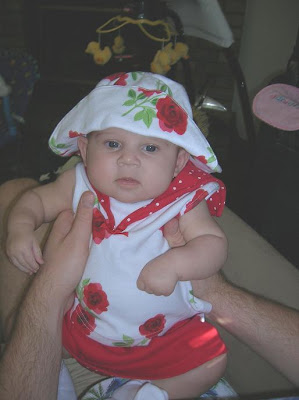 Back in the days when she was somewhat more compliant . . .

Anonymous said…
Beautiful idea! And you can make it so personalized, I love it!

Samantha said…
I think its a great idea. I can't wait to see it! You are going to show us the book right?

I have known about being adopted from as far back as I remember. I really appreciate how honest my parents were with me.
October 17, 2008 at 1:19 PM