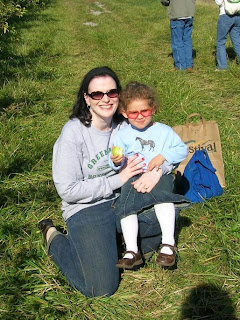 After a whirlwind of kid-centric activities yesterday, my daughter and I were sharing a quiet moment after her bath last night. And by "quiet," I mean that she was ordering me around like a dog while I attempted to tame her raucous curls. I gathered up the various haircare products (this is an ongoing experiment of mine - by the time she leaves for college I expect to have found the perfect combination) and sat on the floor in her bedroom. She sat between my legs and chattered away as I spritzed detangler in her hair.

As I worked, she craned her neck and looked up at the highest shelf above her dresser. Like most kids, she has far too many stuffed animals. My mom, never one to think about things like "how much stuff can fit in a 1200 square foot home," bought A a huge Siberian tiger for Christmas one year. So, the tiger is perched up there (he is sporting some Mardi Gras beads, as most tigers do), along with several large teddy bears. The shelf is also home to a bow-tied FAO Schwarz teddy bear that she received at her baby shower, and nestled in front of that bear is a small one that plays music when you wind it up.

"I want the music bear," A said. "The one who's sitting with his mommy."

"I'll get it in a second," I told her. I was still negotiating those curls with a wide-toothed comb.

"I want the music bear," she said again. Because, you know, it had been ten seconds and all.

"But I'm sitting on the floor," I replied.

She stood up. "Well, stand up like me," she instructed. She gestured with her hand in case I was still confused. I sighed and began gathering up the towel and whatnot.

Just then, she turned around and faced me. "I love you very much, Mama." She kissed me on the lips and then wrapped her arms around my neck. She pressed her cheek against mine. I breathed in her baby lotion scented skin and closed my eyes. "I love you too, baby."

I handed her the musical bear. I started to wind him up but she informed me that she'd take care of it. She cuddled the bear against her chest and headed down the hall. I was struck by the fact that to her, a mama is simply a larger person (or bear) who looks after a smaller person (or bear). And that they love each other.

I waited seven years to hear "I love you, Mama." And oh, the sound is still just as sweet every single time.

Susie said…
So sweet! Isn't it a riot how they fast these 3 year olds can go from bossy to lovey? It gets me everytime too! I hope we get to meet that sweet girl next month. My wild man and your sassy girl would make quite a team of trouble!
October 12, 2008 at 8:33 PM

Cassandra said…
I use an interesting method of hair cleaning which involves only baking soda and apple cider vinegar. Of course, this method wierds some people out, but I have found it to work well. I can send you the link if you want to give it a try!