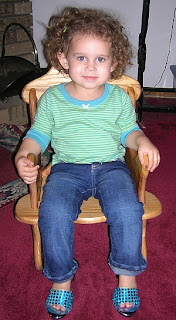 Short Stuff and I had an interesting evening together. To back up a bit, I had an appointment after work with my optometrist. It was a good time, as always. I am convinced that the whole "air puff in the eye" test is actually not a valid test at all but rather an elaborate practical joke carried about by optometrists the world over. Then comes the "this one or that one" test. You know you don't want to fail this test (Oh my God, what if they both look the same?!?!). If you do, you're walking out of there with glasses thicker than your forearm. (Brian Regan has a funny routine about this. I tried to find a clip of it on YouTube but all I could find was the audio, accompanied by some weird anime crap. But anyway, it's funny.)

Anyway, I guess I passed because he informed me that my prescription was the same as before. But then, not content to leave well enough alone, my optometrist said, "As you get closer to 40, you may find your eyes getting dry." He looked down at my file and then looked back at me as if to say: yeah, I have your date of birth right here so what are you gonna do about it, sister?

I then picked up the kid and took her to dinner at Q'doba. Aside from some just-to-hear-her-own-voice screaming and the fact that she rubbed milk on her quesadilla, dinner went pretty well. As I was clearing our table she headed for the door . . . and walked full-on into a clear glass window. I don't know if this particular establishment had unusually clean windows or what. She smacked her head and then bounced onto her butt. Stunned, she began to cry. And me, being the good mother that I am, laughed. Just a little. C'mon, it was funny! I picked her up and consoled her so that her little psyche would not suffer further damage.

By the time we got out to the car she was fine. After that we had to go to the grocery store. On the way there A drew a picture on her travel Doodle Pro. "Look, it's Granddaddy!" she exclaimed. Indeed she had drawn something resembling a face. I immediately called my dad on my cell. My parents live 1,000 miles away, so I haven't seen him in nearly a year.

"Six to eight, depending on the day."

The grocery store excursion was surprisingly uneventful. Eating beforehand definitely helped. In fact, she was behaving so much like a human being that I bought her some cheap sparkly dress-up shoes. They have a bunch of these at daycare and I know she covets them. "My special shoes!" she is always proclaiming.

At home she put on the much-too-large shoes and clomped around in them. "I'm a lady," she chanted over and over. She wore them to bed and I'll be picking sequins out of her bedding until the next laundry cycle, but it's a small price to pay in order for my kid to enjoy that kind of glamour.

This weekend I am headed out of town for a wedding. P is staying at home with the kid. Last night I dreamt that while I was gone he put her in a peach skirt with a red sweater. In the dream I kept saying, "Don't you know that peach and red don't match????" Worse yet, he paired the ensemble with black and white houndstooth check flats. I suppose it's better than the sequined cha-cha shoes, but still . . .