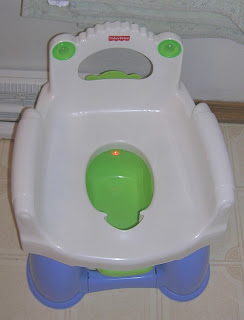 Apparently A's fixation with body parts and bodily functions has been leading somewhere: she peed in the potty for the first time yesterday. Hallelujah!

She kept asking to go to the bathroom (which has been going on for a while now), but the thing is - she never pees. She says she went, waves a huge wad of toilet paper in the vicinity of her privates, and flushes it in the big potty. The flushing seems to be the focal point for her. Our water bill is going to be three trillion dollars this month.

So on Saturday afternoon we decided just to leave her pants off. We figured either she'd go in the potty or she'd pee on the floor. I've been fostering dogs for over seven years so it's not like my carpet is not acquainted with urine. And wonder of wonders - she peed in the potty! She wanted to tell her Meemaw about it so we called my mom and A delivered the big news. Then we called her Aunt Craggy (Craggy is not my sister's name but that's what A calls her - I have no idea why) so that she could share the good news again.

After church today we repeated the same scene. No pants = ease of potty usage. P was busy watching football so he tried to engage her in ways that could allow him to keep watching. He asked her if she wanted to play catch with her plastic ball. A grabbed the ball and threw it to him. "Do you wanna catch my gyna?" she asked. Without missing a beat her father said, "No, I don't want to catch your gyna." So they continued to toss the ball back and forth while he watched the game out of the corner of his eye.

Living with a two-year-old really does feel like living in a mental ward sometimes. She says things that cause us to look at each other like, "What the?" I decided to take myself to a movie this afternoon and the kid really wanted to come with me. So she threw on her shoes and started towards the door. Now, keep in mind that she is wearing a shirt, some socks, some shoes and some Elmo stickers. And that's it.

So anyway, that's another little milestone under our collective belts. I know she isn't housebroken by any means. But I figure that if I can train dozens of dogs, I can get the kid trained, too. I wish I could just keep shoving her outside and then praising her when she pees in the grass, but I suspect the child protective people might show up if I did that. When she was first born I accidentally said I was taking her to the veterinarian a few times. And I have been known to tell her "Leave it!" (a common dog training command) and to praise her with "Good girl!" My friend Dave (keep in mind that most of my friends volunteer for the same rescue) once admitted that he had referred to his arms as his forelegs.