This is serious, mes amis

December 05, 2014
My daughter has an admirer, a beau, a suitor. What do kids call it these days? A boo? And she's his shorty?  Is that how this works?

Being a good NPR-listening, Democratic-voting, liberal Unitarian Universalist, I've been very careful to tell my daughter things like, "When you grow up, you might marry a boy or a girl. Or maybe you won't want to get married at all." Well, I needn't have bothered. My kid is firmly interested in the opposite sex and I think I can already picture some seriously dramatic teen interactions coming up in a few years. I'm just imagining some lovelorn fool from her algebra class standing on our front lawn and begging her for just one more chance.

For now, though, we are just in the beginning stages of the gooey stuff. A boy in her class has it bad for my kid. When I went in for parent-teacher conferences a few weeks ago, I took the opportunity to look through my daughter's desk. It was like Hiroshima in desk form. Very bad, very messy things happening under that lid. It looked like what her room would look like if I left her to her own devices. I did find a note from the boy in her desk, though. He asked her if she wanted to go to the movies with him. (And if she says yes, how does this work, exactly? Does his mom drive? Do I drive? And where do we sit? Between the two lovebirds is what I'm thinking.)

When I asked Mrs. K (during the conference) if she knew who the object of my daughter's affection is, she said, "Do I ever."  Apparently she's been through this sort of thing before and said that it normally just fizzles out at some point. Fourth grade romance is a tenuous thing, I guess.

My daughter tells me that she and the boy sit together on the carpet during reading time. They also sit together at lunch. She said that at first the other boys made fun of him but now they don't. Fourth grade romance knows no barriers, people!

Today, when I picked her up from daycare, she was wearing a new scarf. It was an early Christmas gift from her wooer (I am running out of synonyms for boyfriend).  His mom made it. Is that not the cutest thing?  He put it in her locker this morning. I won't tell him that she spilled queso dip on it at dinner. Shhhh.

I am not sure what happens next.  Do I need to rough him up or anything? Ask him about his employment prospects? And, most importantly, how soon does he feel that he can take over the monthly payments we are making to the orthodontist? 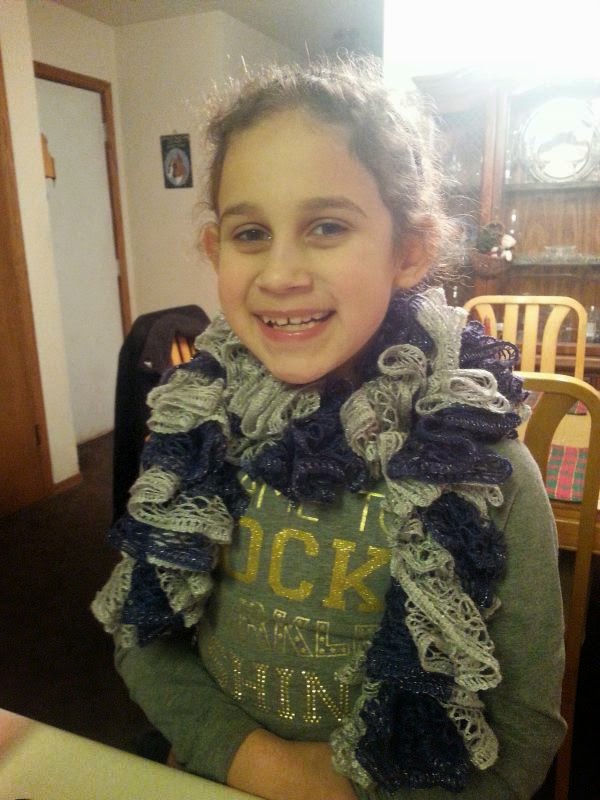 The Lovely One said…
I love that he got her a gift! But is she going to get him something now? And if so, what??? The gift selection would cause me serious anxiety!
December 5, 2014 at 11:06 PM