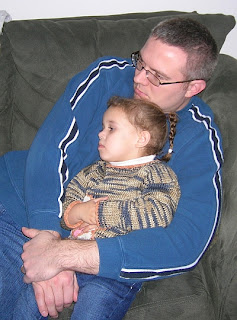 We did not know A's sex before she was born. For some reason we thought she would be a boy and we focused primarily on boys' names. (Her birthmother had had an early ultrasound but the baby was too active to get a clear view.) I have to admit I was secretly thrilled when I found out she was a girl. Don't get me wrong - I would have been over the moon if she had been a boy. It's just that I grew up with sisters (no brothers) and that's what I'm used to. I felt like I would know what to do with a girl. As my mom has often said, "We don't know how to clean poop off balls."

In the hospital, I held A in my arms and in a high-pitched voice I said to P, "Daddy, I'm going to have 13 bridesmaids in my wedding! Oh, and I need 18 pairs of shoes!" I think my other half figured out pretty quickly that having another girl in the house was not going to be cheap. However, none of that mattered because he was smitten as soon as he saw her. He likes her better than he likes me and he's known me for over 15 years. I knew almost from the start that I had a daddy's girl on my hands.

In my head I flash-forward 11 years to a day when our 13-year-old daughter will come out of her room wearing some God-awful ensemble the size of a kleenex and announce that she is headed to the bus stop for school. I can't wait to see his reaction, because I think it is going to be priceless. He doesn't know about 13-year-old girls - but I do. I'm also looking forward to the day when some slack-jawed boy shows up on our front porch, asking for our daughter. I suppose it will be quite the coincidence that her dad will just HAPPEN to be sharpening his combat knife from his Marine Corps days. Oh, and I suppose he might just HAPPEN to mention that he often had perfect scores on his sharpshooter weapons tests back then. Oh, and that he is trained to kill a man with his bare hands.

The other night I made a simple dinner of grilled cheese sandwiches and oven fries. I had to go to Weight Watchers the next morning, so I opted for a veggie burger and no fries. I had A's plate on the counter next to her dad's plate. He wasn't home yet and I took a fry off his plate and ate it. A few minutes later, he did not even have his big toe in the door before she started yelling, "Dada! Mama ate your fries!" And yesterday I smacked him in the arm after he made a stupid comment (he saw that I had purchased some super hero postage stamps and actually asked me where I bought them . . . "I dunno, Kohl's?") Anyway, the kid started yelling, "Don't hit my dada!"

A often says things like "Dada is a prince!" (and I reply, yes, I thought so too at first - ha!) I'm glad she loves her daddy so much. It's funny to me that people even say they look alike sometimes. I'm thrilled that they have such a great relationship. All I ask is that he not geekify her too much. They watch Star Trek together and one night while she was in the tub I heard her singing "friendly neighborhood spiderman!" It is only a matter of time until she makes him hide his AD&D books when her friends come over. But for now . . . it's all good.