November 17, 2013
My sister and her guy are now officially hitched. Now that I've got my bridesmaid's duties all checked off, I am just hanging out and enjoying a couple days of vacation.  I've barely seen my kid. As you'll recall, the best man died two weeks before the wedding. His daughter is here and she and my kid seem to be getting along famously. They even slept together on the top bunk in my nephew's room last night. My nephew actually gave up and moved to his sister's room because the girls would not stop talking. Anyway, A has been so busy hanging out with her new friend and her cousins that I only see her periodically when she needs food.

To back up a bit, my daughter and I arrived late Thursday night. My dad and his girlfriend picked us up at the airport and drove us back to their house in Maryland. I went to bed and the kid stayed up and partied with the grown-ups. Typical. On Friday morning, I left the kid with my dad and I drove to my sister's house (in Virginia). I figured she'd need help with pre-wedding stuff before the rehearsal dinner.  One job I was given was to figure out how to tie the wedding rings onto the ring bearer's pillow.  Needless to say, there are countless YouTube videos that give step-by-step instructions.  I did a few test runs and soon felt confident that I had mastered the art of ring-tying.  Most of the afternoon was taken up with making lists and figuring out all of the who-needs-to-be-where kind of stuff for the wedding.

We had the wedding rehearsal at 5:00.  Believe it or not, I somehow failed to realize that the ceremony would be held outside until my dad happened to mention it the day before.  The wedding was scheduled to be held at the Winery at Bull Run.  More specifically, it was to be held on an area of the winery called The Ruins, which consists of a stone fireplace and a large stage of sorts. The bridal party was instructed to walk out of the winery, across the grass, around a barrel, through the seating area, and up three stone/slate steps to the stage. I was paired with a nice guy named Frank. Frank might actually weigh less than I do.  I had some concerns about getting up those steps in my towering heels and the floor-length dress.  I wasn't sure how much I could really lean on Frank, what with him being a stranger and me outweighing him and all. One of the other bridesmaids, my sister's best friend, was standing behind me during the rehearsal and said that she felt pretty confident that she would be depositing her front teeth on those steps at the ceremony.

After the rehearsal, we headed to a nice restaurant for the rehearsal dinner. I have been so careful with my eating in the three months leading up to the wedding. I have clocked a gazillion hours at the gym. So, naturally, I sat there and ate hundreds of thousands of tortilla chips. :::sigh::: I am such a loser sometimes. After dinner, I did something I've never done - I ordered an after dinner drink. I ordered Disaranno Amaretto.  That's right - I get a little crazy when I'm on vacation. It was definitely a lot different from the cheap amaretto that my husband I mix with orange juice at home.

I'll write about the wedding in another blog entry. I have to go now. My two-year-old nephew has taken off his pants, so I am taking that as a sign that we are about to party. 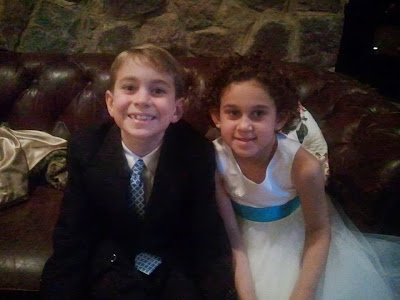