August 09, 2013
I'm sure you're dying to know how our visit with A's birthmom went. Well, I'm here to tell you that it went quite well.

My daughter was a bit nervous beforehand. I assured her that I was nervous, too.  After all, it had been seven years since the last visit (and, needless to say, she doesn't remember that one). During those early months after my daughter was born, I really didn't know how to navigate a relationship with her birthmom. I knew that I wanted to maintain contact with her (after all, this is someone I would have enjoyed spending time with even if she didn't just happen to be the woman who, you know, gave me a baby to raise), but I wasn't sure exactly what was expected or what she wanted/needed or what was best for all concerned. In the beginning, there were lots of phone calls and visits and I was worried that I might feel differently about the level of contact in the future. It was a weird time - she was emotional from being recently pregnant and then following through with the adoption plan she had made, and I was still learning how to be a mom (and also dealing with a surge of emotions).

I think we are both on firmer ground now. She's married and is raising three great boys. I still don't know what I'm doing as a mom, but I have learned to trust in the relationship I have with my daughter. I read a quote somewhere . . . "If a parent can love more than one child, it only stands to reason that a child can love more than one parent." Before my daughter was born, I didn't feel overly protective and/or possessive of her, but once she existed on this side of the womb, everything changed. I felt like I was suddenly capable of lifting mountains and emptying oceans and doing anything else that might be needed in order to make sure she was safe and happy. I still have a deep, visceral need to protect her, but I learned along the way that I don't need to squirrel her away and keep her all to myself.  My husband will tell you that I'm not good at sharing, but really, that just applies to food I've ordered. If he wanted fries, he really should have ordered some.

Anyway, back to the visit. We made arrangements to meet at a park yesterday.  A and I got there first and waited for J and her boys to arrive.  They pulled up a few minutes later and we walked to the playground together. If there was any awkwardness, it didn't last long. She and I have kept in touch via email for the past 2 1/2 years, so it felt like there had been an ongoing conversation and not some great chasm of disconnected strangeness.  The kids took a few minutes to warm up to each other but were soon playing together . . . well, except for the toddler - he spent most of his time finding various ways he might be able to injure himself on the fully padded playground. At one point my daughter fell but has forbidden me to speak of it, so I shan't.  I'll just say that she injured herself in an unusual way and leave it at that.

Eventually we left the park and headed to Applebee's for dinner. I am not a huge fan of Applebee's (I find the lack of vegetarian dishes irritating), but I had a $25 gift card to use. And I was definitely planning to pick up the tab for our table of six because when someone gives you a baby, you buy her dinner. For the rest of her life. If I could buy her a tropical island or an airplane and give it to her, I would.

Dinner was good.  The kids were pretty wound up. A sat between the five-year-old and the twelve-year-old.  She seemed to enjoy hanging out with both. Later she told me that she thinks the twelve-year-old is cute, so I let her know that it's actually against the law to marry him. I was hoping to head off that little crush before it gains traction. And of course he's cute - he looks just like her!  After dinner, I paid the tab and . . . my credit card was declined.  Greaaaaat. This was a first for me and it was just a wee bit embarrassing. This was actually my debit card and I knew there were sufficient funds in the checking account (believe me, I know my account balance down to the dollar), so I have no idea why it was declined. I decided not to raise a stink and gave her a different card instead. C'est la vie.  I checked the checking account when I got home and sure enough, it was fine. Who knows. At least I got through the dinner without spilling anything on myself or impaling myself on my fork or anything. Plus, with four kids at the table, it's hard to stick out as the loud/messy/uncouth one. Don't get me wrong - the kids were all well-behaved.  Just verrrry energetic.

After dinner, we said our good-byes in the parking lot and snapped a few photos. A wanted to go back to the park but we really needed to get home. She was quiet on the half-hour drive back to our house. I wasn't sure if she was tired or just full of thoughts about her brothers. I'm glad she got to meet them. I'm sure there will be other visits in the future (they live several states away, though).

Oh, and in case you're wondering, I didn't get a chance to ask all of the goofy questions on my list. J has great teeth and emphatically stated that she is not the culprit when it comes to the kid's dental woes. She did admit that A's singing/dancing/admiring herself in the mirror habit might have come from her. She refused to confirm or deny whether her toilet paper usage would be deemed excessive.

She gave me the okay to share a couple of photos (I failed to get a good one of the wee brother, though). 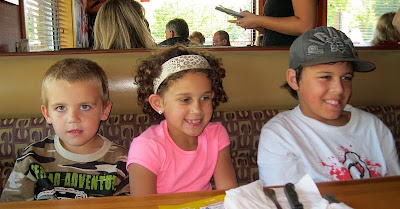 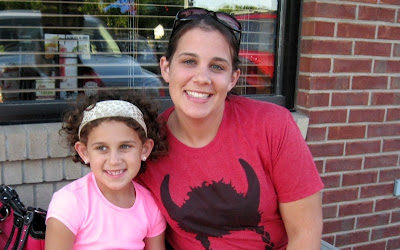 The Lovely One said…
1. I'm so glad the visit went well.
2. She's right-- the 12 year old is cute!
3. The Agent had his atm card declined last week, and he assumed the magnetic strip was wearing out and he needed a new card. He called, and it turns out that someone had gotten his card number somehow and been trying to make charges on it, so the bank put a hold on the card. You call your bank to see if something like that happened!
August 9, 2013 at 10:28 PM