October 08, 2012
Last week I got the best possible news.  No, Glenn Beck didn't lapse into a coma - although, yeah, that would've been awesome. My news is even better - our babysitter can now drive. And she has her own car!

P and I had a date night on Saturday. Not having to play rock-paper-scissors to determine who must drive the sitter home was a definite plus. We (and by "we" of course I mean "I") had planned the date night before I knew I would be going to a concert the night before the date. To say that I was tired on Saturday night would be a spectacular understatement. When I got home from the concert, it was after 3 a.m. By the time I got into bed, I had been awake for nearly 24 hours. I don't have the stamina for that kind of foolishness. At all.  As exhausted as I was, my brain would NOT shut down and call it a night. I fretted over when I should tell P about the speeding ticket. My ears were still ringing from the concert, so I'm sure that didn't help matters. I tossed and turned for hours, only dozing off for a few minutes at a time.

So, I was in rough shape on Saturday. I ran some errands in the morning and then spent part of the afternoon soaking in the tub (while watching "Downton Abbey"). The sitter arrived at the appointed time and P and I headed over to an Italian restaurant in time for our 6 p.m. reservation. We'd never been there, but I won a $50 gift card at the Pride event back in July and could not let it go to waste. The dinner was really good. We had crostini with pesto for an appetizer. I had pasta with vegetables and marinara sauce for the main course. Plus a side salad. Plus two glasses of a nice primitivo. We shared some dark chocolate gelato for dessert.  Before making the reservation at this particular restaurant, I had looked up some reviews online. People seemed to be divided into two camps - they either love the joint or they hate it. The people who hated it complained of stale bread and slow service. My guess is that these folks are used to the Olive Garden and are blissfully unaware that 1) Italian bread is supposed to be crusty and 2) good food takes more than 30 seconds to prepare.  I think I will leave a review myself.  We did end up spending $44 out of pocket even with the gift card, so this explains my initial comment about never having been to this restaurant.

At dinner, I brought up a topic that has been bugging me for a while.  Thanksgiving.  Thanksgiving is a weird holiday for me since I don't eat turkey. My preference, in all honesty, is to travel either to Virginia or Oklahoma and spend the holiday with my people. However, this year I don't have any vacation time accrued and I don't really have the cash for such a trip anyway. One of my husband's friends always invites us to his home for Thanksgiving. We went last year (and my husband goes over there by himself on years when the kid and I are visiting relatives). I always appreciate the annual Thanksgiving dinner invitation from my husband's friend, but I have to confess that the day is usually a little awkward for me. My husband stands outside with his buddy and they fry the turkey. My daughter disappears upstairs with a bunch of kids and has the time of her life. I sit in the living room, staring blankly at a football game on TV and doing my best to chat with the other women, offering to help, etc. Everyone there is very cordial to me, but I never really feel comfortable. Believe me - it's me and not them. They are super nice people.

So, this year I was prepared to tell my other half that I'd prefer to stay home by myself. However, just as I was about to tell him, he said, "I don't think I want to go over there this year. I think we should just stay home." My heart leapt. I love this guy! I quickly hatched a plan to make all of the traditional Thanksgiving dinner stuff myself - except the turkey. I'll have to look into some local resources in order to find a small, pre-cooked bird or something. But, I can make all the other stuff - homemade yeast rolls, mashed potatoes, and so forth. I am not a great cook, but I ain't half bad either. So, now we can spend a quiet day at home, just the three of us, and then I can spend the evening working on my game plan for Black Friday. Woot!

In case you wondered about the rest of the date . . . after dinner we went to an Irish Pub that was scheduled to have live music starting at 9. We had almost an hour to kill, but we quickly found a way to entertain ourselves: watching some drunk guy in a golf visor playing bad music on the jukebox. Then he sang along, loudly, but with all the wrong lyrics. Mercifully, just as the band was about to start playing, the bartender called a cab for Mr. Golf Visor and he stumbled out the front door (then stumbled back in, then back out again).

When we got home, I dug my contact lenses out of my eyeballs, climbed into bed . . . and was unconscious a few minutes later. Tres romantique, ne c'est pas?

After such an eventful weekend, I decided to take it easy on Sunday. The kid and I went to church and then I took her and a couple of her friends to the jumpity-jump place. I figured I couldn't get into too much trouble at church or at a bounce house mecca. I sat in a corner and read "In Cold Blood" by Truman Capote while the girls got their ya-ya's out. But, just so you don't think I've stopped being an unrepentent bad-ass . .. I smuggled in two apples despite the large sign on the door that says, "NO OUTSIDE FOOD OR BEVERAGES." 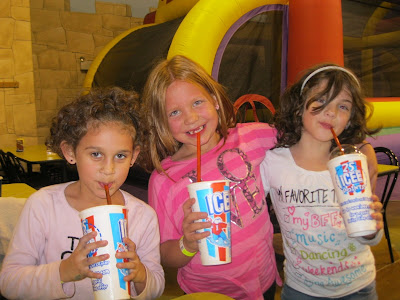