January 03, 2010
I'm starting my new job tomorrow and will have fewer vacation days for the foreseeable future. For the past few weeks, I've put in a fair amount of overtime (the free kind, since I'm on salary) in order to get ready for the big transition (being sold to another company). So, I decided to take it easy (as much as a Type A list maker like me can "take it easy") and spend as much time with my daughter as I could over the four-day holiday weekend. Never one to leave anything to spontaneity or chance, I scheduled Four Days o'Fun. 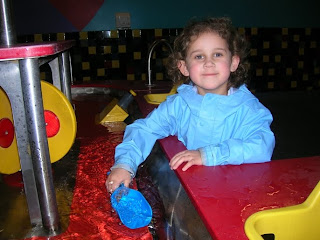 Day 1: The children's museum. I had some free passes that I won in a raffle last summer, so this seemed as good a time as any to use them. We headed down to the museum on New Year's Eve afternoon. Every kid in the state was already there. The museum was throwing a celebration every hour to celebrate the hour itself. The staff led a parade every hour. Picture hundreds of screaming children armed with noisemakers and confetti, marching through the building. Or maybe you shouldn't picture it - I'm still woozy and I saw it in person. The kid had a great time. She got soaked in the water room, threw confetti, boarded a fire engine, and climbed inside a gigantic human heart. 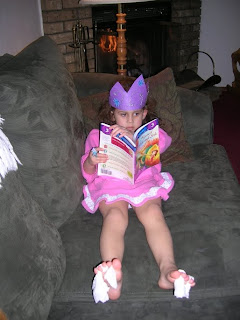 That night, P had to work so A and I had a girls-only party. We played Hyper Dash. We watched Bolt. I built a fire and actually kept it going for once. I painted her toenails. She definitely gave it the old college try, but lasted only until 11:55 before losing consciousness. I carried her to her bed, removed her homemade party hat, and kissed her at the stroke of midnight. 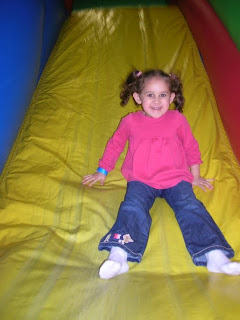 Day 2: The jumpity-jump place. For Friday's excursion, we went to the jumpity-jump place to get our ya-ya's out by jumping on the inflatables, climbing through obstacle courses, etc. I like this place because parents get to jump for free. And yes, I do jump with her. While it's true that I'm getting old and I'm starting to fall apart a bit, I'm glad I can still be the mom who gets in there and plays, dignity be damned. 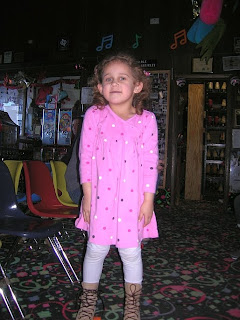 Day 3: The roller rink. We arrived at the roller rink as soon as it opened. Much like the children's museum, hundreds of millions of kids were already there. Countless birthday parties. Exactly three people working. I think I go to the roller rink more for my benefit than for my child's. I just like to skate. A's friend from church also came (and her grown-up friend Jennifer, who I actually thought was my friend until my daughter advised me otherwise). At the end of the session, I invited A's church friend and her mom back to our house for games. We played Hyper Dash and Hullabaloo, and then ushered the girls into A's room so that the moms could partake of some wine. 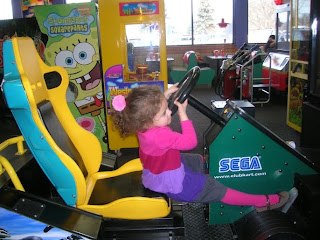 Day 4: The final proof that I am the best mom ever: I took her to Chuck E Cheese's after church. When we got there, the girl at the admission station told my daughter that she was giving her some tokens because she liked her smile. That worked out well, because every time we go, we lose at least half a dozen tokens to shit that doesn't work. Putting up an "out of order" sign would be pure craziness, I guess. All told, we won 365 tickets and were able to walk out with two mid-sized pieces o'crap. I tell you, it takes a special kind of person to work the redemption counter at Chuck E. Cheese's. I think I would last about an hour of having kids trying to figure out if they want a Tootsie Roll or a plastic spider ring. Then, everything in the case would become a projectile and I would enact a "you'll get what I give you and you'll like it" policy that would be strictly enforced.

So there you have it. Four days o'fun. Woot!

Beth said…
I'm jealous to know that you live close to fun stuff like Children's Museums, "jumpity-jump places" (which, like you, I enjoy as much as my son), and even Chuck E Cheese! We'd have to travel 2 hours one way to get to any of that. Sounds like a fun weekend!
January 4, 2010 at 5:34 AM