Do you wanna take a ride on his disco stick? 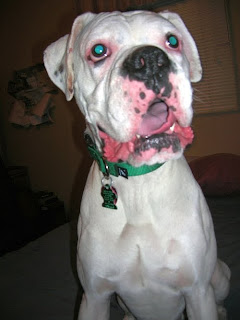 I picked up a new foster dog on Saturday. I was a little bit nervous about taking on a new pooch because my last foster dog, Fritz, was so easy to have around. I knew I wouldn't get that lucky again. Montana was surrendered because his owners are divorcing and selling their house. Neither spouse could take him in their respective apartments. Montana is a handsome three-year-old white Boxer (not deaf, as some whites are). He's good with kids and dogs. He's really a very nice dog.

There is one major problem with Montana, however: his ginormous testicles. He has been attempting to violate my dogs since his arrival. I've told him, "Take a cold shower! Think about baseball!" All to no avail. After a weekend we are now affectionately referring to as Humpfest 2010, I gave some serious consideration to neutering him myself. I have a basic idea of how it's done and could feel my frustration growing with each thrust of his little white hips. As he is preparing to hump one of my dogs, he does this little cha-cha-cha step where he juts his rear legs out behind him, alternating in quick succession. I called my vet clinic this morning and got him in for next Monday. Gideon is having a minor surgery the same day, so that way I can drop them both off at the same time. I hope we last that long.

In the mean time, we've got six more days to tolerate Humpy McHumperton. I remember learning in school about the Supreme Court's attempt to define obscenity. Here is the definition:

1) A thing must be prurient in nature

2) A thing must be completely devoid of scientific, political, educational, or social value

3) A thing must violate the local community standards

If it meets all three of these things, it is obscenity.

I think we are pretty close with what's been going on at our house. First, Montana attempted to make sweet love to Gideon, my male Boxer. Gideon, who generally tolerates just about anything, turned on Montana and told him where he could put his desire. This scene repeated itself several times until Montana did actually absorb the message. Gideon's actions surprised me a little because normally he is so easygoing with other dogs. As I've often said, "If Gideon doesn't like your dog, your dog's probably a dick."

Gretchen, for whatever reason, has not been as successful in thwarting Montana's advances. She's tried telling him politely, "Hey, no thanks!" She informed him that she signed one of those celibacy contracts in high school. She's tried telling him less politely. But still, he perseveres. He licks her cheek and then does the cha-cha-cha. And so on it goes. As Gretchen moves from room to room, Montana follows along behind her, humping the air as he goes. "And you thought I was bad," said my oft-neglected husband.

After giving my daughter a shower this evening, she started saying how she knows Montana's a boy because he's got a penis. "Does he ever," I thought to myself. I feared the conversation would spiral out of control from there, but she didn't ask any questions. Thank God for small miracles.

aliciajill said…
oh you had me literally laughing out loud! soo funny! you may have missed your calling in life as a writer for SNL....... Good luck with him this week!
January 26, 2010 at 12:03 AM

Steph K said…
Freakin hilarious! Reminds me of Clyde when we first got him. :)

Jodi said…
Ah...I remember that time before we got our male cat neutered. I spent an entire night yelling "Get off of your sister!" before shipping him to my parent's house for the weekend...he was scheduled to get fixed on Monday!

khudson33 said…
Tears are falling that was too funny- not fun for you of course or poor confused Mr. McHumperton. Good luck with the week-- hopefully the weekend will fly past!
January 27, 2010 at 10:15 AM

Laurie said…
We have a life-size plush black Lab stuffed animal we call "Woofie". Perhaps it has something to do with the fact that we put it outside the gate looking in at the dogs when we first got it(they barked their heads off), or that my daughter likes to chase the dogs around the yard with it, but Lila, my 3 yr old spayed female Boxer enjoys nothing more than trying to hump "Woofie's" head.
January 31, 2010 at 9:07 AM