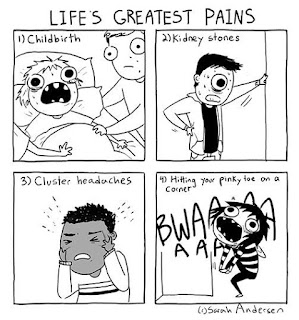 It all started with my lower back. It was hurting - a lot. I attributed the pain to a yoga class I attended on Tuesday. I hadn't been to yoga in a couple of weeks and figured maybe I'd just overdone it. One too many twists or something. By Thursday I couldn't even walk normally, but my back has been in spasm before so I didn't think too much of it. Plus, my crappy posture and the fact that I sit "wrong" while I'm working leads my back to revolt from time to time.

On Thursday evening I offered to take the kid to Noodles for dinner. Her dad was working so we were just going to run out for a quick bite together. As soon as I got to the first traffic light, a searing pain shot through the left side of my abdomen. I thought it would pass and continued on. I soon realized that Noodles was going to be short two customers that night. I just couldn't do it. By this time I was having trouble breathing from the pain, and I was simultaneously hot and cold. I took the first exit and headed back home.

For the next hour or two, I tried to figure out what to do with myself. I took some ibuprofen and then some aspirin. I took a very hot bath and tried to read the latest copy of UU World as I soaked. I felt dizzy when I finally climbed out of the tub. I tried to lie down in bed but couldn't find a comfortable position. Nothing made the pain better. I wasn't sure what to do. My daughter was getting increasingly upset. While it's true that she's a self-absorbed teen, she gets pretty worked up if someone around her is hurting in any way. The pain was bringing me to tears - it was just relentless. And I am someone who has a pretty reasonable pain tolerance - or at least I think I do.

Finally, I had her call her dad and ask him to come home from work in order to take me to the hospital. I gathered up some sweat pants and a tee shirt, but soon realized that I was incapable of changing my clothes. My daughter tucked them into a tote bag for me. Before long, my husband was home and I shuffled out to the car so that he could take me to the hospital.

Now, I do not deny being a somewhat vain person. I am not one of those roll-out-of-bed-and-go people. I tend not to leave the house until I've at least got some mascara on. But here I was, in my bright red pajamas from Kohl's, my hair still wet from the bath, and zero make-up. And honestly, I did not care. That's how bad the pain was.

My preferred hospital is on the other side of town, but the mister insisted on taking me to a closer one. He sped all the way there. I've been holding a grudge against this particular hospital for years because when I had my gall bladder out, they acted like they'd never met a vegetarian before. The day after my surgery, Nurse Ratched brought me beef broth and was all kinds of annoyed that I wouldn't eat it. So, I've been avoiding that hospital ever since (also, I had filled out a comment card to express my annoyance). I live in a mid-sized town but, inexplicably, we have four full-sized hospitals. I guess it's good to have choices.

My husband pulled up at the emergency room and left the car with the valet. I don't know if was my wet hair, ashen skin, or pained expression that made my plight obvious, but the valet dude ran straight over and opened the emergency room door for me. I let my husband do the talking at the registration desk. I hunched over and clutched the corner of her desk. She was very matter-of-fact (I'm sure she's seen some shit) and directed us to sit down and wait. It occurred to me that emergency rooms probably see people who are basically just trying get their hands on some opioids. Who knows.

We waited ten minutes or so before being brought back to a room. The nurse asked me a few questions and I advised her that I was already down a gall bladder and an appendix - I figured it might save her some detective work. I sat on the bed but was unable to lie down. Instead, I clutched my knees to my chest because it seemed to make the pain 1% better. "I'm guessing kidney stones," she said. Ahhhhh. This was actually making sense to me. The lower back pain wasn't from yoga after all. They made me pee in a cup and then advised me that there was blood in it (I hadn't noticed but then again I don't spend a lot of time examining such things).

Next came the attempt at an IV. It was almost an exact repeat of the scene in February when I had my appendix out. My veins, generally, prefer to be left alone. They do not easily submit to needles and such, and they do not go down without a fight. A pair of nurses (one was a student) finally got it in, but it was not anchored in an ideal way, apparently. Thereafter, I had to hold my left arm out at a very specific angle or the IV didn't work (it was attached to a pump that would start beeping if I moved even a single millimeter). Eventually, I was taken down the hall for a cat scan. The technician told me, "I'm not supposed to say, but it's a stone." So, the theories were correct.

By that time, the pain meds that were administered via the IV had finally started to work. I could breathe normally and even lie down like a normal person. I was discharged by midnight and sent home with two prescriptions (one for Vicodin and one for the nausea that accompanies the Vicodin). We stopped at a CVS to pick up the medications and P actually asked me if I was going in. Um, no, a sufficient number of townfolk had seen me in my pajamas at that point. When we got home, I took the meds and went to bed. I was just so glad to have my pain reduced to something in the range of "discomfort."

So, I'm signing off because I've now killed enough time that I can safely take another Vicodin and go back to bed. I will be drugged until the stone passes (gee, I hope it's as fun as I've heard!) My stone and I bid you good day, sir!