May 01, 2016
In keeping with our "there's no way you're getting a birthday party every single year" tradition, we let our daughter pick a weekend destination for her birthday (instead of a party). She chose a massive indoor water park, located about 2 1/2 hours from our home. We let her choose a friend to bring along.  I also ordered a cake so that we could take that along, too.

The water park is a resort and so, of course, you can stay there. However, I could not bring myself to spend quite that much money. By my calculations, the weekend would have cost about a grand if we went that route. Instead, I booked us for two nights at a Best Western that had a pool and free breakfast. (It was still $300 for the hotel, but regardless . . . still an improvement.) I then purchased day passes for the water park.  We arrived on Friday evening and of course the girls wanted to go swimming in the hotel pool right away. We had stopped at a Red Robin for dinner along the way, because I had a coupon for a free birthday meal for my daughter (call me cheap all you want, people! I prefer the term "thrifty!")

I poured myself an adult beverage and headed down to the pool with the girls. I knew I'd be traumatized enough by spending the whole day on Saturday in a swimsuit, so I decided to pass on the swimming on Friday. Speaking of swimsuits . . . the kid has been bugging me for a bikini for a while. She had tankinis, but nothing that was stomach-baring.  I don't know why I wasn't too thrilled about the idea. I have a lot of trouble articulating it. It's certainly not about body-shaming my child. Her body is perfect like it is. Anyway, I gave in and bought her two bikinis at Justice last weekend. She tried on a couple at Old Navy that she liked, but they felt very flimsy to me. My concern was that she would tug at the top endlessly if it didn't fit well. Also, she is in between sizes so that complicates matters, too. The ones at Justice fit better, even though they cost at least double what the ones at Old Navy cost.

The girls had fun swimming in the pool. Or at least I assume they did.  There were a gazillion kids in there. The hotel was pretty crowded. Apparently, there were a bunch of soccer tournaments going on. I was tired so I didn't last too long after we went back up to our hotel room. The girls plowed through a party-sized bag of Doritos. Quite the party indeed! I have no idea how late they stayed up. Those two are perfectly content to play Minecraft until they can't see straight.

The next morning, we grabbed some breakfast and then headed to the water park. The place was enormous. We didn't know where to start! The girls ditched us pretty quickly, which was fine. They are old enough to be on their own a bit. P and I rode a bunch of different water slides. I rode a couple that he refused to try. They had two slides that were a little bit harrowing. You climb to the top of a platform, stand in a tube, and then the floor drops out from under you.  There were two variations - one that dropped you straight down and the that other spun you through a loop. I did both. I couldn't help but notice I was the only chick up on the platform. I guess it's more of a dude thing. I am probably slightly more adventurous than people think I would be.

We regrouped mid-day for lunch. P gave me some cash and told me to splurge on a fancy drink at the bar. I have been really stressed about a medical issue and some work stuff. So, maybe he felt a little bit sorry for me. I don't know. Anyway, I went to the bar and ordered a mai tai in a souvenir glass. I noticed that prices weren't posted anywhere. The bartender made the drink and sat it down in front of me. Guess how much it was? No, higher. Nope, higher. Twenty-seven dollars. It was a pretty large drink so yes, I did share it with Mr. M. "How much was it? Like $15?" he asked.  I just smiled back at him.

I didn't get a lot of photos from our water park adventures because of course I wasn't walking around with a phone when there is water shooting out in a million directions. I did take some photos of the girls attempting the boogie board attraction.

After our water park adventures, we headed back to the hotel to shower and clean up. We went out to dinner at a vegan place.  The girls weren't that enthusiastic at first but once we were out and about, I think they had fun. The most exciting thing for me was the chocolate cake - I ordered a slice to go. That way, I could have cake while the others enjoyed the kid's birthday cake. Win-win!  Back at the hotel, we sang "Happy birthday" to my daughter and then had cake. Her birthday isn't until Tuesday, but she has school and then choir practice that day. So, there won't be a lot of time for celebration.

I was hoping the girls would be so tired that they wouldn't even think of asking to go to the hotel pool. Ha ha!  Ten minutes later, I was once again seated poolside. I watched a stand-up comedy routine on my Kindle. I was wearing ear buds, but that didn't stop an elderly security guard from looking over my shoulder and asking, "How do you like that little TV of yours?" Oh, mister.  You are so cute with your little-TV business.

So, that was our weekend.  The next day we had breakfast, made a brief stop at an outlet mall (the kid has money from her grandparents burning a hole in her pocket), and then drove home.

On the way home, it occurred to me that this being-a-mom job is much more thankless than I ever imagined. Being a wife, too. I don't think either of them realized just how much preparation it took to pull off a successful weekend like that.  From making reservations weeks in advance, to doing research on the best places to stay/eat/whatever, to making sure we brought a lighter for the birthday candles . . . I mean, I made it all happen. I made arrangements for the dogs. I made sure we had birthday plates, napkins, and utensils. I packed snacks and drinks. But had I forgotten something? I'd have never heard the end of it.

Oh well. The important thing is that my kid had a kick-ass birthday celebration. Plus, I'm sure I'll get a big raise at my next mom review. 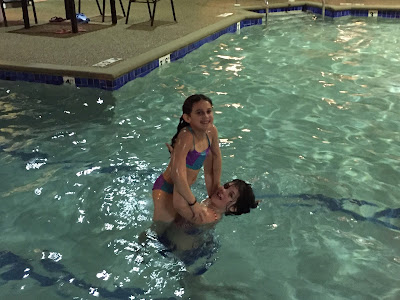 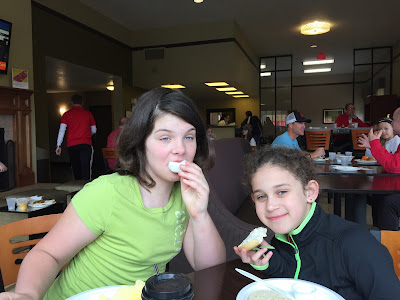 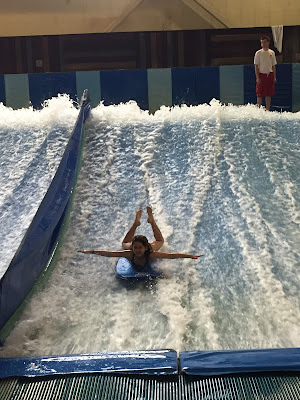 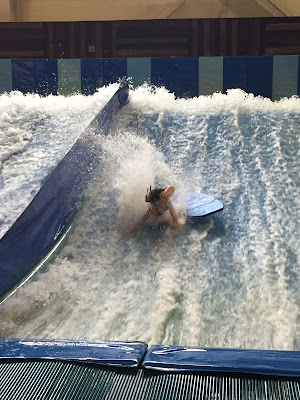 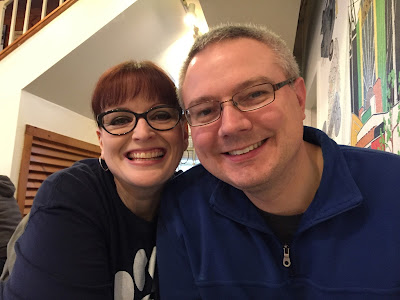 Unknown said…
I am so impressed you did those waterslides! I could never.

You really do sound like such an amazing mom, and yes, it certainly can be a thankless job. But it sounds like you have such a sweet, close relationship with your daughter. And her birthday weekend sounds like it was amazing!
May 1, 2016 at 8:36 PM