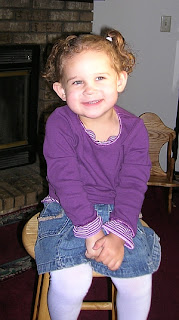 A is an only child (well, technically speaking, she does have a biological half-brother, but she is *our* only child). She is our first and, as far as we know, our last. She was the long, long, long awaited baby who brought an end to years of heartbreak and longing. And, it goes without saying that she is exceedingly cute. As such, she has been photographed daily since her birth. Sometimes multiple times a day. It's gotten to the point where she now mumbles "cheese" and doesn't even look up.

This morning she is wearing a new fall outfit so I thought I would take a quick snapshot. But here's the problem: Pingu is on. The kid is obsessed with Pingu. If you've never heard of Pingu, count your blessings. Seriously. He appears on the "Sprout on demand" channel on our cable system. They broadcast the shows in sets of three, because they are only about 6 minutes long. While the shows do get replaced by different episodes from time to time, we still get PLENTY of time to memorize the ones that are available.

Pingu speaks some kind of gibberish. I can't begin to imagine what, if anything, she is learning from it. We went through a long Leapfrog Letter Factory DVD phase and in that case I could at least pretend it was okay because she did, in fact, learn the sound for every letter. There are moments when I can almost understand Pingu's appeal. I actually heard myself telling P, "Pingu makes his beak into a funny shape in this one - check it out." And I heard him say, "I like the hockey one where the guy is wearing a mask and it looks like he has no head."

So anyway, this morning I propped her up on a stool and attempted to take a picture. I knew I was taking my chances, what with Pingu and his hilarious hijinks being on the TV and all. She gamely smiled through a couple of shots and then said the following: "I'm done cheesing." Great, I've got a comedian on my hands. I have to admit it was pretty funny, though.

I gave up and let her resume watching Pingu. I'm waiting patiently for the Pingu phase to end but my new fear is that it will be replaced by something much, much worse.